george osbourne ((fuck the caps)) lives. Gregory Isaacs dies. Hey, nobody ever said this was gonna be easy...

At risk of turning into rent-a-eulogy, I have to give a big tip of the trilby to the Cool Ruler. Before I started to hunt down roots and ragga LPs, I only really knew him from his 1982 hit Night Nurse ((wasn't this track actually used in a late '80s TV advert by the cough medicine manufacturer of the same name? Please, someone, tell me I'm not dreaming it...)), and I didn't really give him much thought. Needless to say, I soon changed tack when I heard Slave Master and caught his turn on the classic flick Rockers...

It was said that Isaacs could park his flash motor outside any venue in JA, knowing that nobody would dare leave so much as a fingerprint on it. I'm just glad, for the car's sake, that he never put this theory to the test in Burnt Oak. There are so many songs you could pluck out of his repertoire to create a makeshift Youtube-on-a-blog headstone, but this is still my personal favourite: the time he teamed up with Ninjaman in 1991, on one of the first ragga LPs I ever bought. Just to recap - Ninja and Gregory Isaacs once shared studio time together. How their egos didn't clash and save the Large Hadron Collider the job remains a mystery. Sorry Youtube sounds like a cellphone, but there y'go...

By the way, I was intending to write something about Halloween. Remember that inconclusive, interactive BTi 'text magic' experiment from a few years back? Well, I was thinking we could do something similarly fun for Halloween this year. Like.. mask up, get some vuvuzelas and rusty scythes, and HACK OSBOURNE'S HEAD OFF HIS SHOULDERS, THE FUCKING WANK. 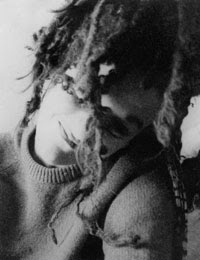 I doubt she heard me anyway. She was too busy toasting over Nicolette's singing.

Still, I'm a bit old fashioned at heart. I like to stub out my cigarette and take off my hat whenever a coffin's being carried out the door, regardless of whether or not I usually took the piss out of her. Why, I'd do the same for Don Letts ((er...don't hold me to that one)). So, I'm going to be good today and only say nice things about her:

To give her her due, she was an annoying white rasta before you were. Yes, YOU - don't bullshit. Just because you changed your name from Jeremy to JAH DUBKAT when the first Spiral Tribe 12" came out, and wasted your money on a Twinkle Brothers LP because you knew shit about reggae, doesn't mean you broke any boundaries. In fact, the Crustie and Goa Trance communities should be holding a candlelit vigil in Ladbroke Grove, right this very minute. ARI WAS THE QUEEN OF THE WHITE RASTAS. I mean, try and imagine how provocative she must have looked to meat'n'potato pie racists in 1970s Britain. It's a bit different from spending £80 on rasta extensions in Kensington Market, so you could whip peoples' arms while you were jiving around down Megatripolis.

Her version of Fade Away was so good that when I later heard the original by Junior Byles, I thought it was a bit dull. So, there you go. She trumped a real rasta, once.

THE CRASSICAL COLLECTION: FEEDING OF THE 5,000 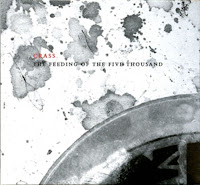 First time I heard Feeding of the 5,000 by Crass, back in Easter 1990, it was comparable to the dream sequence in An American Werewolf In London where the zombie stormtroopers burst into the guy's pad in an orgy of senseless, savage slaughter. Having grown up with a Sacred Heart hanging over the telly and a genuine fear of Hell, hearing a band call Jesus a rapist who sucks was about as rock'n'roll as music could get, and the fact that the whole platter sounded like a buzzsaw fight breaking out on the tube just added to the appeal. The only pics of the band were disembodied, murky snaps that looked like they'd been clipped from Victorian photographs of Bedlam. They all had weird names and they lived in a commune, which I thought was a network of wigwams, in Epping Forest. They were anti-military, anti-system, but obviously not do-gooder Quaker-types; hence lines like, I'm no deaf, dumb fucking jerk / I'm no spastic lying in the street or Jesus Christ can save my life / But I can always use me knife. What's more, they were all probably dead or in jail for subversive activities by 1990.

Actually, Catholicism wasn't that bad. It was more ludicrous than anything; watching some senile, flakey goat in a frock bang on about the Sunday Sport being filth, and all the older Irish guys, my dad included, straining like huskies on a leash, eager to get Mass the hell over with so they could send the women back home to put the dinner on, and go for a pint and an argument in the social club. I remember the time my dad drove us to Knock, to see the infamous statue of the Blessed Virgin that used to weep blood. "AH NOW...SHE MUST HAVE STOPPED FOR TODAY," he growled in front of the clearly inanimate, non-bloodied alabaster object. Come on, he didn't believe in it any more than you do. The nuns made my mum's childhood an utter misery. They couldn't have really endorsed any of this tosh - they just did it 'cos it was drummed into them from birth. Then again, I probably wouldn't be so flippant if some grotesque pig of a padre' had tried to bum me.

Anyway, I fucked up on a lot of the Anarcho-Punk Commandments. Sorry, I can't turn vegetarian while pork pho exists, and I refuse to wear rubber shoes - I'd rather stare death by electric shock in the face. It's Crass's fault - they made me question everything to the extent that I eventually ended up questioning the anarcho-punk dream. But I always had a soft spot for Feeding..., so I decided to check out the newly remastered CD version ((that's had ex-bass player Pete Wright - actually the most troublemaking and funny ex-member at the moment - threatening to drag Crass through the High Court, for 'betraying' their ideals)). So what do you get with this reissue? Well, the remastered packaging's a complete waste of tree. The only new 'fact' to emerge is Penny Rimbaud's claim that the Mafia sent him a warning letter about Reality Asylum. Straight up - one of the Gambinos apparently rattled off an angry missive concerning a blasphemous, 45p UK punk single. It's just that Rimbaud forgot to ever mention it before, obviously...

But..what does it sound like??, you DARE whinge, you seal-culling sap? Well, it's still a racket, relax. I slightly prefer the original vinyl, purely 'cos it had more kick on the drums, more SKRAK on the rhythm guitar...and it was nice watching the pic of the man with the flag spin around on the label. But it's nearly there. Let's just say that all those previous CD reissues are gonna be selling for 1p on Amazon Marketplace from now on, and Feeding... is still a raucous, narky and hilarious punk classic - guaranteed to piss off old ladies and sullen ex-sergeant majors. Well, it would be if 'old ladies' existed anymore...most 60-year old women are dying their hair blonde and taking overhead mobile snaps of themselves for their Facebook profiles. The days of Jane Birdwoods swapping cucumber sandwiches and using binoculars to spy on young people with funny haircuts are about as anachronistic as Prestel, Busby or the Pools.

You also get a bonus bag of demos: the group's '77 Soho session, which sounds like it was recorded in '57 ((I'm not kidding)) and comes across like Terry & The Idiots trying to infiltrate the skiffle scene - including a rant about Tony Blackburn, who apparently deserves a blow to the bloody 'ead. Still, Demolition and I Don't Like It are so crap, they're actually funny ((admittedly, they're also exactly how I used to sound on guitar)) and the version of Owe Us A Living is MAJOR side-splitting territory - be warned. The Feb '78 demos are more like proper CRASS ((probably 'cos they'd sorted out the line-up by then)) and are pretty much a warm-up for Feeding..., with rough, spikey versions of the tunes. Almost like having a very well recorded tape of a gig from the era.

Let's not forget though, it wasn't all fun and games. They upset the Mafia.

Thing is...you could pop in a time machine and sit in on the actual recording session, and it'd never sound quite as great as it did when you were 13.