* COCKLES AND MUSSELS (WITH SALT AND VINEGAR)

* BANDS PLAYING GIGS FROM THE BACKS OF LORRIES

* COMPLETELY BANDAGING YOUR FACE AND SPENDING ALL DAY ON THE CIRCLE LINE IN PYJAMAS, DRESSING GOWN AND BOVVER BOOTS, STARING DOWN PASSENGERS THROUGH THE EYE-SLITS

Mention 'bloggers' and people tend to think of groups of socially inadequate, soapophobic men with pixel tans, hunched over whirring, groaning iBook G4s, surrounded by stockpiles of empty pizza boxes - drooling inanely as they bash out 8,000-word critiques of the new Broadcast/Focus Group CD, pretending Warp sent them a promo copy (they sucked it off Mediafire) and scratching their scabby slack-serpents in anticipation of yet another post-post wankathon at www.midgetnurses.com. This is the picture we have from the horror stories in magazines and newspapers and on television.

But is it true? Well, not of me, of course - but in general, yes. I'm loathe to name names - the "bloggers' fraternal code" and all that - but I could tell you some stories, alright. Like the one about the famous online hack who used to keep a stack of empty plastic cider bottles by his PC - so he could PEE into them, mid-post. He was so dedicated to his craft, he'd never have DREAMED of interrupting a full-scale missive on Lacan and Eurobeat by actually getting up and going to the toilet. If you're going to do this blogging caper seriously, you can't afford to waste a minute on waste. This particular individual now boasts a book deal to his blossoming household name.

A lot of men go into blogging expecting to secure a sexual partner or nine. Ooh, but Simon Reynolds has tonnes of birds - this has GOT to work! These bloggers are all married, they found love at last - I'm up for a slice of that! they gurgle, before racing out to buy a Mac, diving into Blogspot.com and tapping up a psychogeographical review of Penge.

All I can say is - don't believe everything you read. Most of these bloggers were married before they started. Their wives tolerate these bizarre online journals as a sort of mildly irritating, eccentric hobby, deemed far preferable to the thought of their spouses chatting to strange ladies on IM, or loitering down the pub all evening.

Sure, I've had the odd boy or girl chuck 'emselves at me at the bar, wanting to know if I can help them sneak into the next Xylitol gig for free, and damning me with faint praise. But as for landing 'tonnes of birds', you'd be better off getting yourself a Burns Scorpion or starting a fanzine if that's your game plan. I'm serious. ((In fact, you know what I'd do if I was 18 right now? Start a Young Conservatives fanzine. Don't wobble your chops like some UAF crybaby: as Brendan Behan once surmised, In matters of prick, there is no principle. The untapped market for Tory zines is screaming out to be exploited, and the polemic's not exactly difficult to master. Just interview The Killers and Coldplay and ask them their views on capital punishment and the EU. Or reclaim Crass from the anarchists and celebrate them as the late 70s heralds of free enterprise they undoubtedly were, and you'll be selling thousands of issues each month. Hey presto - a year later, you're strutting around the Conservative Party Conference, meeting loads of hot young finishing school sorts who literally want to fuck your brains out beneath a 'Peace Through NATO' duvet, because you argued that the long-term unemployed should be forced to catch fish from canals if they want to eat, in issue 3 of COMMON CAUSE. Well, it's up to you - but I wouldn't hold your breath waiting for a knock on the door if you'd rather blog about industrial music or old rabies adverts)).

So, imagine my surprise when a brand new blog launched last week, dedicated to the women who keep these lumbering blogger sloths going. I mean, how can anyone argue with Murgh murgh murgh, I live on Mars as an assessment of David Bowie's career ((though, to me, he'll always be stuffing flowers into his gob in a Japanese POW camp))?

Personally, I'd love to see a URL called 'BLOGGERS' DADS', filled with childhood memories of scathing vitriol from various online scribblers' fathers. Admittedly, this concept probably wouldn't work for anyone who had a semi-normal dad - ie, one who tolerated their offspring's taste in rackets ((or for anyone whose pappy actually liked The Epileptics or Shy FX - what a hideous thought!)) - but the only problem I can see with the 'WAGS' set-up is that most women appreciate the fact that the male EGO is a pathetic, tissue-thin abstraction, easily torn to shreds by the slightest criticism or mishap in life. They therefore spare their partners the full extent of their complete withering disdain for shit like Autechre and Boards of Canada, for fear of carbon monoxide clouds gatherin' in the garage.

Whereas dads never gave a shit, did they? The Cult were patently cross-dressing homosexuals; the Pogues were taking the piss out of the 'real' Irish; Smiley Culture was just making noises with his mouth; all these groups were shite, and you were a fucking idiot for listening to them. Biggest con going. Prance around like a load of wankers and take money off gullible brateens like you. Give 2 Unlimited a pair of shovels and see how they fancy a proper day's work, the shithawks. Betty Boo? Do you like the look of her, boy? Think you'll like the look of her when she's 45 and the drugs have taken their toll, eh?

WHEN I DIE, I KNOW I'LL GO TO HEAVEN

I'VE GOT JESUS AND THAT'S ENOUGH 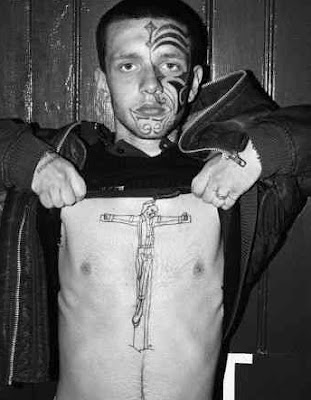