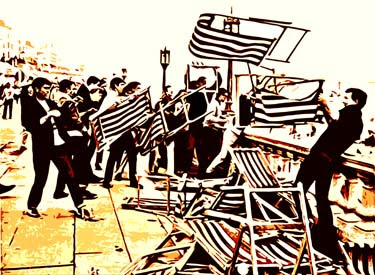 ((Some mods, fannying around with deckchairs, AGAIN. Suppose they'd get four years if they did this now)).

Unless you've seen the event details on Failbook, you'll probably be unaware of this event, so I'm going to give it the oxygen of publicity here:

The Old Lookout is the chapel of a religious pirate radio cult whose radio station Radio Mind, is relayed by its' Missionaries across the golden sands of this popular seaside resort.

Inspired by an obscure group of early 20th century Anglican clerics with a shared interest in telepathy, psychic research and psy...chology as paths of divine/human communication, Radio Mind will take over the Old Lookout gallery, Broadstairs as an outpost from which to re-open the paths of transmission through performance, broadcast and participation.
Radio Artist Magz Hall specialises in creating sound and radio events outside conventional studio settings and this micro transmission investigates the shifting terrains of the transcendent and the quotidian through new communications technologies. Drawing on early 20th Century experimental Protestantism, historical and mythic seafaring cults and the powerful mythology of the radiophonic aether, notions of radio, piracy and the religious imaginary will be brought into question.

This radio installation will broadcast from an 18th century fisherman's hut in Broadstairs harbour, its beams and panels salvaged from scrapped vessels, and will broadcast across the immediate beach area as a micro-FM broadcast to be transmitted by beach-mission cultists baring radio receivers.

So, there you go. I'm not so hot on the Anglicans, but it should be interesting - plus I haven't been to a wind'n'rainswept beach, listening to inhuman electronic sounds, since the time my cousin dragged me to Bundoran for 'Krazy Nite Krazy' at O'Gorman's nightclub. That alone SHOULD have landed us four years in clink...