A PSYCHIATRIC EVALUATION OF "BAKED BEANS AND EGG" BY MACKA B 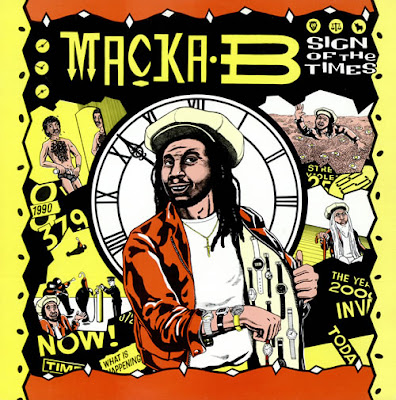 Basically, Brummie MC Macka B pops down the pub for a lunchtime Guinness and a game of dominoes. He's jotting down some lyrics about Indian chicks, or something, when he suddenly spots his old mate, Fred. He hasn't seen Fred for yonks - or at least since Fred got married to a white lady. Macka bounds over to greet his old mucker, only to recoil in horror when he observes his pal close up - Fred's positively emaciated! Reeling in shock, Macka demands to know what's going on.

Fred begins to cry as he relates his misfortunes. It transpires that marrying a honky proved to be the biggest mistake of Fred's life. Yep, what they say is true - white women really CAN'T rustle up a meal to save their lives. Despite Fred's encouragement - in vain, it would seem - his wife is utterly incapable of plonking meat or fish in the pan without charcoaling the bloody lot. In fact, the only 'dish' she's remotely proficient at making is 'baked bean and egg' sandwiches - although, as a Sunday treat, she also serves Fred a packet of ready salted crisps for afters. Fred reveals what a lesser man would be too ashamed to admit - he has eaten nothing except baked bean and egg sandwiches for the past 278 days.

Clearly moved by this harrowing testimony, Macka offers Fred (who's now weeping hysterically in a foetal ball on the pub carpet) an invitation to his flat to sample a four-course Caribbean meal. Unfortunately, this generous offer leads to Fred going completely bananas and making a spectacle of himself in the boozer. "Yes Fred...YES... you are invited," Macka reiterates, in an attempt to calm his spar, who's now throwing himself around the pool table and excitedly informing uninterested drinkers that he's going to Macka's for tea. The two friends part ways - Macka to prepare this gargantuan, wholesome noshfest, and Fred to presumably spend three hours gawping at a packet of Persil, frantically praying his wife comes home to put the washing in.

Come 7pm, Fred rolls up at Macka's on his moped - no doubt buzzing with adrenaline and gripping the handlebars with sweaty, trembling mitts. Macka's laid out a ginormous spread, which causes Fred to rub his hands and lick his lips. In fact, Fred's so blown away by this vision of gastronomic paradise, his eyes actually turn red. Macka heads into the kitchen to fetch some plates and tall glasses for the carrot juice - only for Fred to pull his helmet back on and announce that he has to go back home...to help his wife butter the bread for their baked bean and egg sandwiches! Notwithstanding Fred's appalling lack of time management, a bewildered Macka B is left rightly enraged as he watches his old 'friend' scooter off into the distance. After all, Macka's gone to a lot of trouble knocking up this banquet, only to be cruelly snubbed by an emasculated ingrate. At least Macka can put some of the rice and peas and dumplings back in the fridge, to keep for later in the week, but it's still been an afternoon of toil in the kitchen for nowt. Perhaps feckless Fred didn't even pause to consider the social aspects of 'going round X's for dinner' - which means that Macka also wasted his time (and £1.50) hiring a DVD copy of Babylon from the local library. Macka closes the door, half-heartedly chews on some yam and ponders his ex-mate's selfishness.

Hmm...we've kind of been here before though, no? Macka had another friend, didn't he - the one who tried to go out with that Indian chick. He's canoodling on the sofa with Mr Singh's daughter - probably feeding her some line about wanting to go travelling around India and how he's fascinated with Hindu spirituality ((even though she's Sikh)) - when, suddenly, her brothers' turbanned death squad charge thru the front door, wielding splintered hockey sticks, forcing "Macka's mate" to flee via the bathroom window. Or what about that other 'friend' of Macka's, who went to the barber and got a wet-look haircut...only for all her hair to fall out, and to then have her hastily sourced wig knocked off by a jiving rude boy down the dancehall on Friday night?

Yup...it's the old "...happened to a friend ((break eye contact))" syndrome - a classic case of transferral. You know...like my 'friend' who once went to BASH, got drunk, yelled insults at Ari Up and then tripped on a beer bottle, falling arse over tit. Or that 'friend' from Luton who blew his chances with the SWP girl by blurting out, "Gyorgy Lukacs? What, the guy who wrote Star Wars?" Ultimately, Macka B is directing his righteous tirades at the phantom in the mirror. It's patently MACKA who grovelled to his wife in exchange for baked bean and egg sandwiches; MACKA who offended the local Sikh community by being unable to keep it in his pants; MACKA who screwed up royally when he tried to cop the Jacko look. It's a long, depressing list...but the sooner Macka faces up to his shortcomings and addresses them, in a spirit of responsibility and maturity, the sooner he can move on and shed the coachload of demons rioting incessantly in his mind, causing him to blame others.

(Originally submitted for WOOFAH 5, but Droid told me to fuck off).

PS - why is Lionel Richie having a strum in the mirror in the top left hand corner?

Comments:
Woofah clearly has no future if they're rejecting such quality as this. It's the same old story, going from cutting edge jungle treks in the early days to decadent wheezing Tory conformism as the end approacheth. They'll be interviewing Nick Clegg next.

Mate that's hilarious! I never even heard this guy and I'm donwloading the album AS WE TYPE.

Droid's a wonk, fuck the purists!