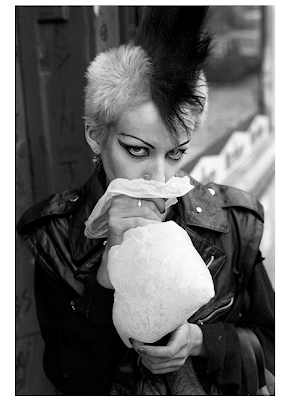 Here's something to take your mind off Pope Benny arranging ratlines for the latest gaggle of defrocked vestry vampires! 58+ minutes of good, honest ANARCHO-PUNK. Basically, I was pissing around on free 'Mixxx' software one night, and ended up knocking this together. WARNING - the mixing is DIABOLICAL (cheers, Stella); the sound levels are all over the place; and I probably pressed the 'Flanger' FX button too many times to ever stand an earthly's of bagging a DJ slot with Heatwave. But hey - this is DIY, not EMI!

Anyway, click on the link at the end of the post to download it, in FOULEST quality MP3 format, and that's your rush hour soundtrack sorted ((NB - you may want to crank your BASS up a notch on some tracks. You might also want to invest in some Nurofen, prior to playing)). Honorary shout-out to John Eden for kindly offering to help out with file conversion, and apologies to BTi mucker PAUL STN for the lack of anything by Reality Control. Right, here we go....track list...

Kicking off with a complete mystery band - ain't got a clue who they were or if they recorded anything else. Bet you 50p that one of their gigs ended in an almighty kerfuffle between anarchos and skinheads, though. They've just got that sort of sound about 'em.

Vintage A-Punk/from the era/when everyone used to/write lyrics like this/on a typewriter/OF COURSE THEY FUCKING DID/// From their '79 Hex mini-LP, a sort of 'concept' platter about a housewife having a nervous breakdown. Only Vi Subversa formed a punk band and sang about it, whereas my old dear started dressing in a sari after she was invited to an Indian wedding ((thank Satan, this cringeworthy episode only lasted a fortnight...she soon resumed Bible-bashing, and opening her son's mail behind his back, with a vengeance)).

The 'Dutch Crass', well deserving of their reputation and your Googling. Been through more line-up changes and musical styles than I can scribble down here, though their spiky pogo-punk stuff still does it for me for the most. 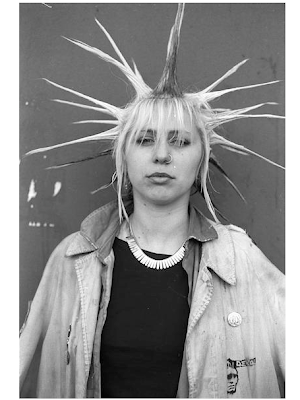 ANYONE can chuck on a black shirt, black jeans, para boots and a blob of Concrete hairgel, and look like they've just staggered out of Dial House at sunrise. It takes a special sort of dedication to actually model your barnet on Lady Justice from the Crass logo. I haven't got a paternal bone in my body, but if I met this chick and she wanted kids with me, I don't know how I could refuse. I'm already thinking how much fun it'd be to buy our sprog his/her first copy of 'Fungus The Bogeyman' and spice up the inevitable 4th birthday 'pass the parcel' ritual with some Conflict

Before any pedants fire up with "That's not Anarcho-Punk, it's US Hardcore!!", I'd just like to say: that's a WHOPPING BIG circled 'A' inside the first Reagan Youth LP fold-out cover. Miles better than Minor Threat boasting about glugging lemonade and saving themselves for marriage, or whatever they were squeaking about.

Proper 'ard kore nutters. Interviews with Apostles / Academy 23 / UNIT frontman Andy Martin make Mark E Smith come across like Daniel O'Donnell, and I can think of precious few other 'punk anti-heroes' out there blessed with in-depth knowledge of quantum mathematics, astronomy, karate and spin bowling. Though he'd probably deride me as a pathetic, nostalgic waste of DNA, only fit to donate his wretched carcass to medical research for even doing this mix. Ex-Apostles drummer Chris Low once sent me a really cool anti-royal family A4 print, which I've since had framed.

Anti-royal wedding single from '86, with Class War mainman Ian Bone on vox. Should've topped the charts, but merely resulted in a hilarious Daily Mail expose', babbling on about sick anarchist troublemakers producing a chilling picture of Prince William in a noose.

Hastings' most shambolic. Properly tuned guitars are a decadent, booge-wah concept and this killer track proves why. Like a Chad Valley turntable running low on batteries, as a wiser man than I once put it. Sums up the whole c'mon, anyone can do this shit! spirit of punk in two-and-a-bit glorious minutes.

Is that Annie Anxiety on vocals? Fuck, I'd love to see one of those 'PUA' creeps try it on with her, whoever she is. Narky pre-Flux Of Pink Indians brickwall thud. Good luck sneaking this onto the playlist at your mum's 60th. By the way, if you're wondering why Tube Disaster ain't on here, it's 'cos Mixxx refused to load it. Blame the robot, not me.

Bet you they're not the real Soledad Brothers. Dedicated to all you banker cunts who haven't even had the decency to top yourselves yet. 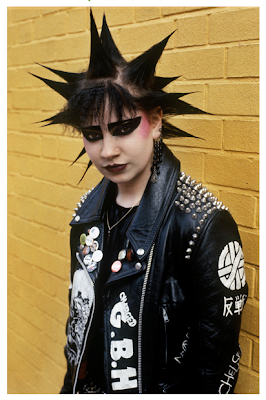 If you strolled up to this maenad and told her that that spazbox Sandi Thom wants to be a 'punk rocker with flowers in her hair', here's the stare she'd rightly give you

There wasn't a pig, sheep, cow, fox, deer or beagle not on its hind legs and cheering, the day this riotous EP came out. Bleedin' seminal.

I personally can't stand this band - always sounded like Ben Elton haranguing the listener over stodgy prog rock, to this cat's ears at least ((and their drummer was called 'Trotsky' - what a cunt!)) - but including them in the mix is probably less hassle than having folks pop up in Comments, demanding "What about the Subhumans??!?" So here's one of their early, decent tunes. The lyrics are still awful, mind.

Crusties go apeshit about this band for a reason.

I once read a Genesis P-Orridge interview from '81, where, discussing Crass, he sneered: "I'm not interested. They make punk records or electronic records, or whatever's fashionable this week". I never really understood that statement - electronic records?? - until I heard Hit Parade. Allegedly ersatz Crass, with a Belfast anarchist on vocals, released around the time of the H-Block hunger strikes.

The black sheep of this mix, given that singer John Cato dumped his anarchist banners in the bin, ended up knocking around with nazi weirdo David Myatt and helped to set up Combat 18 in the late '80s. AYS recorded two EPs of competent hardcore, but this one's my favourite, mainly 'cos I like the way the drummer's all over the shop.

Luton Punx, inn'it. No doubt the same miscreants who sprayed the massive SMASH UNILEVER graffito across the bridge near Wardown Park ((still there in '96)). Neil Transpontine / History Is Made At Night was in this band, though I don't know if he's on this track.

You've gotta crank the volume up for these two rackets. Rough-as-a-badger's-arse sludge-punk from Utrecht and South East London, respectively. 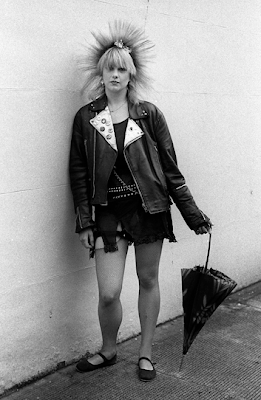 John Eden made some joke about infecting this mix with a dose of 'Umbrella' by Rihanna, during the painstaking .wav to MP3 conversion process. I'm sure he didn't have this brolly-packin' Venus in mind, though

I don't know if Milton Keynes' reputation as 'suicide capital of Britain' was ever based on actual statistics, or just urban myth cos it's a mass housing scheme. But the place threw up some real doomy bands in its time. I love Exit-Stance and their dark rumblings, and their Crime Against Humanity and While Backs Are Turned EPs are well recommended. The bus from Luton to MK used to take ages, but at least you got a huge outdoor market flogging second hand records, paperbacks and army surplus clobber when you finally arrived. Oh, and porn - stalls full of it. I once met the bassist ((Jez, I think?)) by chance, at a Huggy Bear gig in Kings X, and he seemed gobsmacked that I'd even heard of Exit-Stance. Listening to the EP again, for the first time in donkeys', I realise I completely overlooked their dancey, tribal drumming style first time round. 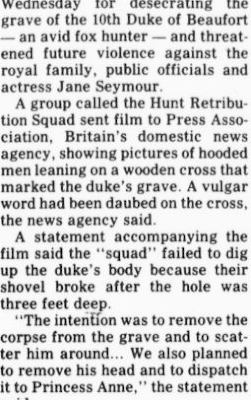 More hunter-bashing hilarity. Admittedly, I've never been sabbing, but I support the fox all the way. When you get indignant country folk huffing, "Well, they have to be culled one way or another! You can't just let them run amok, picking off chickens willy nilly! You pampered city folks...you know nowt!", I can't stop laughing. Yeah, but that's precisely WHY I like foxes! Cos they go and do all this crazy shit with your organic chickens, and then poo on your porch as a calling card. I can't justify it. I'd rather go for a drink with a fox than a horse or hound, put it that way. Besides, I remember crying over Bambi when I was 4, so fuck off, you soulless, chinless cunts.

This one's dedicated to the fine, upstanding specimen of manliness who assaulted Ian Tomlinson ((and then whimpered off on 'sick leave' when the shit hit the fan)).

Bit of a joke inclusion here, but cider and Anarcho Punk go together like Weetabix and milk. No doubt Garry Bushell fancied the singer at some point.

If I could have a one-off loan of a 'gig time machine', I'd probably opt for Conflict or Zodiac Mindwarp, circa '86 ((the year 'the system' finally abolished corporal punishment in schools. Yeah, I bet you younger readers thought it died out in 1923...if only)). I don't know what else to say about this track. I'm sure others will disagree, but if UK Anarcho Punk ever hit a tidemark it was probably Conflict's Ungovernable Force LP. They certainly never bettered it.

didn't John Cato's dad turn out to be Jack Vettriano?

Yeah, think I saw something about that on BBC iPlayer, very moving.

The only family I had was far-right politics!

"I personally can't stand this band - always sounded like Ben Elton haranguing the listener over stodgy prog rock" - actually, you just made quite an oddly convincing case for this....

I saw Subhumans live last year and liked them a helluva lot more than I did at the time (for reasons not dissimilar to yours). It might be that the bill they were on (at Beautiful Days, horrible Levellers-run festival) would have made Tatu look vital, but nonetheless they were in fine form.

I got a get well email off Annie Anxiety when I was in hospital last year. That was nice of her..

Yeah, she seems like a nice lady. I once bunked backstage at a Gary Clail gig at the Venue and had a chat with her about Catholicism

Just to be clear, I hung out with Karma Sutra, sometimes operated the projector at their gigs, and played at their rehearsals a few times (so there is some of my synth on a couple of demo tracks). But I was never actually in the band.