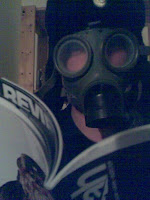 ABOVE: your humble, long-suffering narrator taking a break during a hectic London Fashion Week at Shoreditch House. I didn't think much of the designers, models OR champagne brunches - but the Klix machine was very nice. GASMASK: £7,500, D&G ("Bogside '69" vintage range); FURRY RUSSIAN HAT: model's own; issue 4 of WOOFAH: £4.00, HERE.

Yeah, well, here's what happened. Remember that big clash that took place in Kings X in August 2009? You know? The one where DROID beat JOHN EDEN - nay, massacred him and plunged him into the hot tub of SHAME? Well, believe it or not, WOOFAH 4 was due to come out the following week. Seriously - I saw the proofs, that very night! However, that was only the beginning of the saga...

Now, as you know, I'm not one for gossip. But, a week later, Eden was accusing Droid of nicking toothpaste from his bathroom – not just one tube, but TWO. The Colgate-crazed king-of-the-clash then scarpered back to Eire, blazing a trail of controversy in his wake. Unfortunately, Eden then refused to mail Droid the correct font for the REVIEWS section, announced that he wanted to pull his Ron Vester interview and fired off a bleedin' furious group email that concluded: "Seeing as you 'won' the soundboy crown...you can find your own font, 'your imperial dub majesty'! Oh, seen the libellous 'clash report' on Predictable The Implode, by the way...how do you two jackals sleep at night?"

Y'see, this is what CLASHING is all about – no half-hearted, 'just a spot of fun on the decks!' mateyness here! August bled into September, and suddenly it looked like WOOFAH 4 would never see the light of day. The only time I spoke to Eden that month, he was still growling about the toothpaste, and how he'd rather kill the zine than hand over the crucial font. "But you're not just hurting Droid, you're hurting all the hardcore WOOFAH readers!" I argued. He just hung up on me.

September transubstantiated itself into October, and so the lengthy, painstaking WOOFAH 'peace process' began. Collectively, we zine scribes banded together to bring Droid and Eden to the negotiating table. It wasn't easy – the mere mentions of "Kings Cross"or "Rihanna" were enough to set off both DJs and scupper the good vibes we'd spent hours building up between the pair – but, slowly, surely, we were getting WOOFAH 4 back on track.

October defenestrated itself through November's plexiglass portal ((OH, SHUT THE FUCK UP - The World)) and - FINALLY! - we had a deal. Although still pleading his innocence ((yeah, right)), Droid agreed to send over two tubes of Colgate in return for the disc with the font on it. He also had to sign some sort of clause saying that it was the toughest clash of his life. Still, sanity had prevailed, and, come December, Issue 4 was winging its way to the printers!

Who were off for Xmas until January 13th.

ANYWAYZ... it's OUT NOW and, at an impressive 92 pages, it's indisputably the best one yet. For your dosh you get:

* Studio One photographer Ron Vester spilling his guts on snapping some of JA's biggest talents and hanging out with Coxsone, King Stitt and Ninjaman back in the day ((and the accompanying pic of Ninja juggling two fluffy bunnies is worth the entry fee alone - somebody publish this bloke's work already!))

* A feature on Sci-Fi and reggae that somehow manages to twist William Gibson, Predator and Lee Perry into a cybernetic whirlwind. I mean, you never got lines like "To assume that reggae's visions of the future are equally potent (or profitable) as Hollywood's is to overlook profound differences in implications between these two entangled regimes" in Mixmag

* Jah Shaka's and Mad Professor's kids being unbelievably polite and wholesome. Why can't other teenagers follow their examples?

* A skinhead poem about Eek-A-Mouse

* Heatwave's Top 10 'Hot Gal Commandments', number 8 of which I'm still trying to get my head around, unless it involves radioactive mutation. In fact, this was pretty much me when I read it: 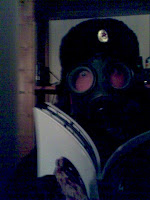 Biased? Am I fuck as like, I only scribbled a couple of short reviews for this one. WOOFAH 4's limited to 1,000 copies, so do pounce on it sooner rather than later, eh? You can also pick it up from Honest Jon's, Dub Vendor and...ah, loads of other places, just check the site.

People are still wondering when Issues 1-3 are gonna be reprinted or put online, but the answer's "23rd of Never", so grab Issue 4 while you can. Incidentally, I don't even have a copy of Issue 3 myself anymore, as I gave it to some snooty groovester chick, thinking she'd be dead impressed. Unfortunately, she didn't find this interesting at all - but hell, if she wants to lust after frock-wearing, Tiny Tears-molesting, Observer Music Monthly bores instead of the freakazoid, bastard grandkids of the SOUNDS explosion, that's her lookout! Though at least OMM hacks get paid, I s'pose...no wonder poor Droid was reduced to filching tubes of toothpaste...

WOOFAH 4 - FOR ALL TRUE RAVERS EVERYWHERE!

Comments:
Thanks once again for your role in brokering peace, Martin.

I am glad that those tubes of toothpaste have now been put beyond use.

wait i've got one
december 'sublimated' into january