"...AND PIGS IN PINSTRIPE STERILISE / THE CITY YOU ONCE LOVED"

SALOME HOOFING A BAPTIST'S HEAD PAST THE KEEPER: are there any blog hacks who HAVEN'T spoken at some sort of conference in the past month? Jetting around on expenses... bombarding delegates with Powerpoint presentations about everything from 'the hardcore continuum' (disproved by Richard Dawkins in 1994, allegedly) to communism to fanzines...getting pissky in the hotel bar and passing out in the elevator...sipping water onstage and chairing panels...pah, whatever happened to keeping it real?

Actually, I took part in a conference at Goldsmiths University recently, but I forgot to mention it. Titled Avant Garde Music - The Accusing Finger?, the weekend shindig was hosted by TERRY WOGAN and featured a range of speakers including me, the bloke who knocks out all those Creel Pone bootlegs and the legendary JON APPLETON - who once invented the Synclavier. Wogan was a great host and had plenty of anecdotes to share: John Cage premieres "4'33"at a New York party. As the piece reaches its conclusion, one of the guests steps forward and exclaims: "Mr Cage - this work transcends all human understanding of the concept of 'sound' itself, forcing us to reevaluate the parameters we place around our auditory senses...engulfed in this space of 'non-music', what we identify as 'background noise' forces its way to the fore, constituting the sonic soundscape - this is truly a challenging piece.." Upon which, Cage angrily ejects the tape, yelling: "I'M SURE I PRESSED 'RECORD'!". Terry also offered a critical analysis of Alvin Lucier's opus "Music On A Long Thin Wire": The wife just hangs me socks on ours!. Suffice to say, the Goldsmiths mens' toilets smell like someone's urinated over a barrel of decomposing prawns, but Jon Appleton fell off the stage and some rich bird from Hastings called Kristi told me she was going to buy me and pay me thousands to sit around writing shopping lists and press releases for her sister's nightclub.

Enough: here's some more corporate-cockatrices-chewin'-up-London news. Maybe not as devious and blatant as the whole Hackney Council / Tony's Cafe' / "there's a Wratten me kitchen" business that went down a couple of years back, but another depressing signpost that, by 2012, London's probably going to look as wanky Wimpy Bar sterile as your average Circle Line carriage. London & Associated Properties wants to drastically alter Brixton Market, albeit with some nice new flats attached - natch. A group's started up to oppose this, their website's HERE if you want more info.

I know I'm from and live in North London but, when I was down Camberwell and New Cross, I used to go to Brixton Market a fair bit. I was really shit at cooking back then: egg and chip sandwiches, anyone? FLambee'd Wagon Wheel with your tea, ma? Honestly, I used to think Pol Pot was some Yorkshire stew. So, to con myself into believing my beans on toast were more interesting than they were, I'd go down Brixton Market and buy all these heavy duty Jamaican spices for about 70p and then tip them into the Heinz gloop. Did you know, my flatmate once got dumped when he brought a girl round Camberwell Church Street and she saw our 'kitchen'? We had these oven trays and a grillpan that looked like something out of the Hiroshima Peace Museum, which lay over all the unwashed stuff in the sink. When we'd run out of money for chips or Wagon Wheels, and had to actually use the plates for beans on toast, or a can of macaroni cheese mixed with a can of meatballs (DON'T TRY THIS), we'd stack the mountain of septic grease on the carpet, wash the plates and mugs underneath, have our tea - then dump the plates back in the sink and throw the untouched grillpan back over the top. Our flatmate Moira bought some cheap plates one day and said we had to pay her 50p if we wanted to use them, but we broke them shortly after, playing frisbee. No wonder her boyfriend got food poisoning. I ate my beans on toast out of a mug once.

Anyway, I also bought this LP down Brixton Market - one of my wisest purchases ever: 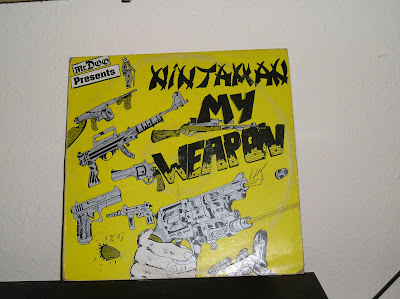 Yes, the original JA pressing!! Crackly as hell, but the bass response is incredible. I don't normally show off my 'reggae rarities' (mainly cos I haven't got that many), but just have a gander at that and grab for the Kleenex. And it was under a tenner too. I actually remember loads about the sunny day I bought it: the smell of fish, the person I was with, the group of black girls and the one with the red jeans with a clunky mobile phone (back in the days of 0398 numbers) stuffed in the back pocket. And now they want to build more yuppie flats over the place! As if they haven't scrubbed London enough already...

I would take a pic of Laurel Aitken's classic Scandal In A Brixton Market, one of the best ska/rocksteady LPs ever made, but it's really rare and costs about £100, and I haven't got it. Someone from the Friends Of Brixton Market campaign might have though, as they've been detourning the front cover: 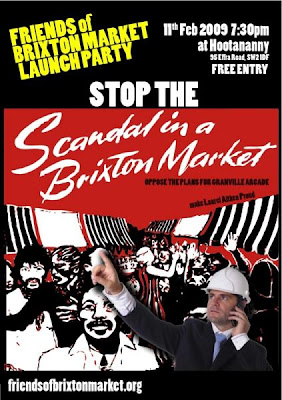 On a vaguely related market theme, and seeing as I've whipped my camera out anyway, here's an old classic from 2005...I'd love to pretend I took it in Luton, but it was actually in Bangkok. 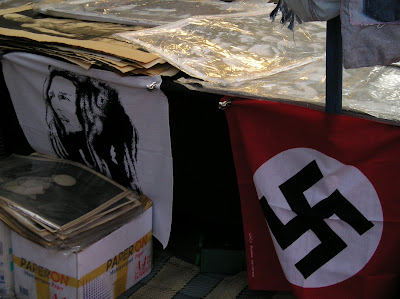