"I AIN'T GOT NO TELEVISION SET OR STEREO...COS I LIVE IN DARNAH"

Is it just me, or is Colonel Gaddafi looking more and more like Charlie Harper from the UK Subs every year? 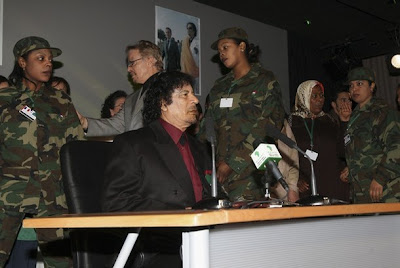 LONDON IS DROWNING AND WE'RE ALL GOING TO DIE

Recently, I gave younger BTi readers a glimpse into the pants-shitting TERROR my generation had to put up with back in the Cold War daze. Yeah, yeah...hook-handed, rucksack-packing imam bombers - BORING. Imagine what it was like to grow up knowing that even if you DID survive a shower of SS-20 missiles, you'd still have to contend with frothing dogs and cats - brains ravaged by RABIES!! - slinking menacingly around Wood Green(which, by 1988, would be completely sealed off as an INFECTED ZONE)...

Well, you don't know the half of it - in 1978, the River Thames was going to flood London, and thousands were doomed! Terrified city workers took to wearing CHILDRENS' inflatable armbands over their pinstripe suits, on their soul-destroying daily commutes. In high rise blocks, community spirit evaporated as families slugged it out for occupation of the top floor flats. Punks huddled indoors, in a Bostik fug, knocking up DIY rafts from the landlord's furniture. And, in Vauxhall, MI5 agents drew up plans to evacuate leading royals and politicians, while re-directing the killer tide towards Brixton and Stockwell....

Oh, just check this out if you think I'm lying - the bit you want to watch starts at 06.25 mins, unless you're prepared to sit through some seriously depressing crap beforehand. Speaking of which...congratulations to Yeoman Mince for actually converting me to fucking vegetarianism in 45 seconds flat. No wonder Crass happened.