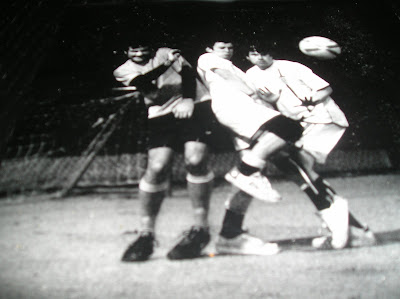 Taking snaps of black and white record sleeves is a real fucking chore. If I had a fiver for every flash-bleached pic I had to delete over the course of this 'series', I'd have enough dosh to fly to the Moon ((that isn't exagerration. I actually opened up the calculator in Mac 'Dashboard' and worked it out. Wouldn't be able to afford the trip back to Earth though...))

I don't know how Woebot ever coped with all this 'photographing covers' shit, back when he was showing off his entire record collection to all'n'sundry! Oh, his wife took them. You don't say. You'd think I'd be able to get the basic flash settings right, seeing as I actually did a photography course when I was at sixth form. Well, I absolutely flunked it. I blame the teacher - some Greek pervert who spent the entire time leering over the girls and talking to them about the 'private image' vs the 'public image', while studiously ignoring me and the only other spot-infested male wretch who'd signed up to become the next Don McCullen. I had a suspicion the dirty old satyr was making up the jargon as he went along. I did like the darkroom, though - but then I've always enjoyed the heady aroma of chemicals. Heaven is licking chlorine off your wrist, outside the swimming pool on a cold November night. It wasn't so cool watching my prints develop, and realising that a simple 'urban portrait' of, say, a fox smoking a pipe, had actually developed into a shadowy blur of nothing remotely recognisable.

Anyway! This platter 'ere's METHODIST CENTRE's When You Love Your Job, It's Only Half A Day EP, which came out last year. For those of you who've given up on choppy guitar music and succumbed to Ghostbox groups called The Timepiece Commission or The Doodlebugged Spectre Kids Of Panion Hall, Methodist Centre are a gay Oi! band who sing about sex and the horrors of office work - or, as their slogan goes, about putting the mental back into departmental.

Ever since 1980, when THE 4-SKINS coughed up the self-contradictory lyrics Just left school, you can't find no work / Be a building labourer or an office clerk, the UK Oi! scene's always known what it wanted to be - BUILDING LABOURERS! The whole OFFICE CLERK side was pretty much neglected, which I always found a shame, especially for a movement keen on 'keeping it real' - but then hanging round the Xerox machine wouldn't have suited most of the bands' over-exagerrated representations of 'working classness' as one big riot of nightly fist-fights down the boozer. Still, Methodist Centre are here to redress the balance - and they're fucking brilliant too!

The EP starts off with Came Out In the 90s, a tragic tale of teen trauma, beamed in from the paunch-stuffed polo-shirted Hades that was the Loaded era:

Have a quiet word with your best mate / Tell him that you think that you ain't straight / Told me mum and made the old girl cry / She just left with me with the question 'why?' / Then I got my best mate real mad / Told him that I want to fuck his dad / Growing up with Section 28 / The schools they are polluted by the state / CAME OUT IN THE 90s! WE! ALL! CAME OUT IN THE 90s! WE! ALL!(etc)

My fave tracks are on the flip side, though: I'm In Her And He's In Me has the kind of simple punk thud that'd make Johnny Thunders chew his way oudda da coffin and Jimmy Pursey weep into his parsley tea, as the singer relates the confusion facing a young office drone who's just pulled a bird, gone back to her place, and suddenly caught a glimpse of her impossibly foxy silver-haired dad. The EP closer, 100% Hot Desking is a classic about navigating your way through the 'overflow' after forgetting your door pass for the fourth day running, and the sheer aggravation, incompetence and bullshit that the average office temp encounters - complete with a "METHODIST...BARMY ARMY!" chant half-way through. I think all 4 songs come to about 8 minutes in total.

Anyway, I can't recommend this highly enough - I got it through a link on their Myspace page for £4 incl. postage, so check it out. On red vinyl too! With a very rude picture on the label. Though, if you're the kind of Oi! fan who likes rubbing his sweaty torso against other shirtless skinheads in the mosh pit, but would rather slit his throat than admit to owning a 7" with a photo of a bunghole on it... or who believes that there really is a conspiracy to prevent the working man from having a pint on St George's Day... you might want to sit this disc out and wait for the Angelic Upstarts to have their pacemakers re-wired for the next tedious, slovenly tour.

I used to do loads of temp work in the '90s, few of the details of which have found their way into the CRAP JOBS posts, otherwise I'd be here all year. Reed in Wembley was particularly bad. That branch was run by a elderly Polish woman called Jo who was notorious for basing job placements on sexual favours. The nerds who turned up in shirts and their dads' ties, and who agreed to pop round this hag's house for a Sharwood's curry, a bottle of plonk and a jaw-breaking all-nighter down Jo's gusset, were rewarded with the high-end stuff, like photocopying invoices down the Casio office on Staples Corner. Nervously backing away from her nicotine-breathed "'ELLO, DAH-LIN!"s, like a lamb from a fox smoking a pi.. from a wolf, meant you ended up toiling in some Stygian warehouse in Perivale or Greenford that took 12 light years to get to in the morning, packing pharmaceuticals or mobile phone parts for a bunch of Hindu slave-drivers.

Eventually, I managed to upgrade myself by PLAYING THE GAME. Fuck, you don't think all those girls who used to hang around the Playboy Mansion actually gave a monkey's about the evil, leprous old gnome who was cracking unfunny jokes, swilling liquidised viagra, begging them to sit on his knee and describing thongs as 'beautiful', do you? So, I whored myself - but only in as much as letting Jo know she might have a chance. I became a cunt tease. This wasn't very hard to do - sex maniacs are pretty gullible, as umpteen porn sites will confirm. I just started to look her in the chest when I was speaking to her.

Jo decided that if I was going to pop round to share her dinner-for-one, she wasn't going to have me knackered from a hard day's graft, so I was sent to an office opposite the Casio place on Staples Corner. I actually quite enjoyed it there - mainly because there was absolutely no work to do. Now, when you're a mere stripling of 12, and you hear Steve Ignorant bellowing about offices being the zombie-staffed brothels where the system rapes your soul, you get the impression they must be the most dull, life-destroying environments you could ever wind up in.

In all honesty, this office (I can't remember the company's name) made the 121 Centre in Brixton look like a rehearsal for Hearts of Gold. These people were nuts. Take my temporary supervisor, Colette - she told me she was going to lose weight by getting an 'independent doctor' to inject her with a tapeworm. She looked a bit flushed and unhappy when I burst out laughing at that one. By the way, she was about 8 stone, if that. Or there was Stuart, a fairly flash, confident-looking bloke, who seemed to have an incessant war going on with his girlfriend. The second time I met him, he was doubled up in agony at his desk, dripping sweat and clutching his stomach, and had to be scooted off to hospital. Turned out and that he and his missus had been on a booze cruise, and he'd picked up a block of Camembert - one of those massive wheels. He'd made some joke about eating it all in one go, and his girlfriend had said, "Stuart, don't be stupid, you can't eat all of that." So he'd pulled out a spoon and eaten the whole thing in front of her, or at least til she stormed off down the pub with her friends. One wheel of Camembert later, and his colon turned into a concrete bollard. "Yeah, but I showed her, the silly bitch!" he told everyone later. As mad as a fox smokin...a frog on a moped, but part of me admired his persistence.

The nuttiest one though, by far, by a fucking country mile, was a small, 40-something guy who looked like Penfold from the dreadful 80s kids' cartoon Dangermouse. By morning, this quiet, inoffensive chap was just your stereotypical office drone. By afternoon, this creature metamorphosised into his alter-ego...THE PHANTOM WANKER.

I heard him one day, in one of the cubicles, grunting and banging as he pulled himself off. Another day, I walked into one of the cubicles and saw a puddle of spunk leaking over the seat. I was mortified - shit, what if someone saw me emerging from the toilet and fingered ME as the Phantom Wanker? Had these workplace masturbatory shennanigans only started when I joined? Would I, a humble 22-year old temp, be accused of this outbreak of onanism?

It came up in conversation, the first night the regulars decided to invite me for a drink after work. "YEAH!" yelped one full-timer, excitedly. "I was having a dump on Tuesday, and whoever was in Trap 2 was definitely having a wank! I heard him biffing away."

"I walked in the other day and I could hear him going at it," said Stuart. "He stopped for a bit when he heard me come in - but then he started again."

I suggested we use our state-of-the-art Word Doc technology to knock up an A4 poster, for a joke - "I WILL STRIKE AGAIN...THE PHANTOM WANKER" - and blu-tac it to the toilet door. Stuart said we'd definitely do it first thing tomorrow - wow, I was getting in with the gang! A snotty, reluctant temp no longer! I'd found my niche! This 'warning' note never materialised, however, because I was called into the boss's office the next morning, with Colette in tow.

"Martin, you've been doing a really good job, and you get on well with everyone here," the boss began. "I'm happy to ask Reed to keep you on. But I understand that, last night, you told several members of staff you wanted to print off a document and put it on the toilet door."

"Yes, that's Penfold," the boss replied, without a blink. (Obviously he didn't say Penfold, I can't remember what the wankaholic's real name was now). "It's been...noted," he smiled. "We've had a word with him about it before, we didn't realise it was happening again. But Penfold is a key member of staff, and I don't want any gossip or bullying going on here. I'd be obliged if you could keep this to yourself. Myself and Colette know, but I don't think it's fair for this to be spread around the office."

Oh, right. Well, I've nothing against chug-merchants, I reassured them. All very good then. Turn a deaf ear to Penfold's five knuckles. As me and Colette returned from the head honcho's room, I asked her, just out of interest, how long he'd been doing it.

"For about two years," she replied. "We did talk to him about it. But nobody else knows how to operate the invoicing system since we switched to Maconomy. So we just leave him alone now, unless he makes it really obvious."

Yeah, 121 Centre, whatever - when did you ever have a Phantom Wanker in your poxy building?

I escaped Jo's clutches as well, but she then demoted me to lugging tables and chairs between floors in some office block in Kenton.